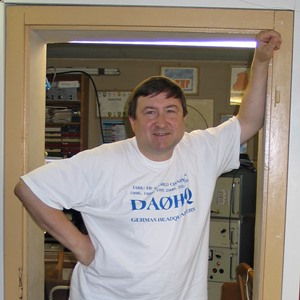 For more than 40 years Lothar was one of the most active radio amateurs in the German contesting and DXing community. His immense achievements in setting up and running the contest station DF0HQ, based in Ilmenau, are evident in the many successful results in world- wide contests.

Furthermore, he was one of the founders and the one and only president of East Germany's newly-formed radio club (RSV) during 1990. In this capacity he prepared the ground for the union of RSV and West-Germany's DARC. His achievements and merits were recognised by numerous international awards as well as by merits from our national radio club. As the head of DARC's Committee for DXing and HF-Contesting he not only furthered the development of these fields on a national level but also contributed to their coordination and advancement within the IARU.

In 2012 Lothar's work of more than 30 years was honoured with his posthumous induction into the DX and Contest Hall of Fame.

Finally, Lothar's name will forever be associated with the successful operations of Germany's DA0HQ-team, which won the IARU Championship several times. For a long time he headed the team's efforts and led the way to singular achievements in this contest.

Through Lothar's tragic death his contest club and the DA0HQ-team lost a buoyant and ever-optimistic fellow operator, an innovative mastermind, and a good friend.

The in memoriam tent is sponsored by DK4VW and the Ilmenau Contest Team.