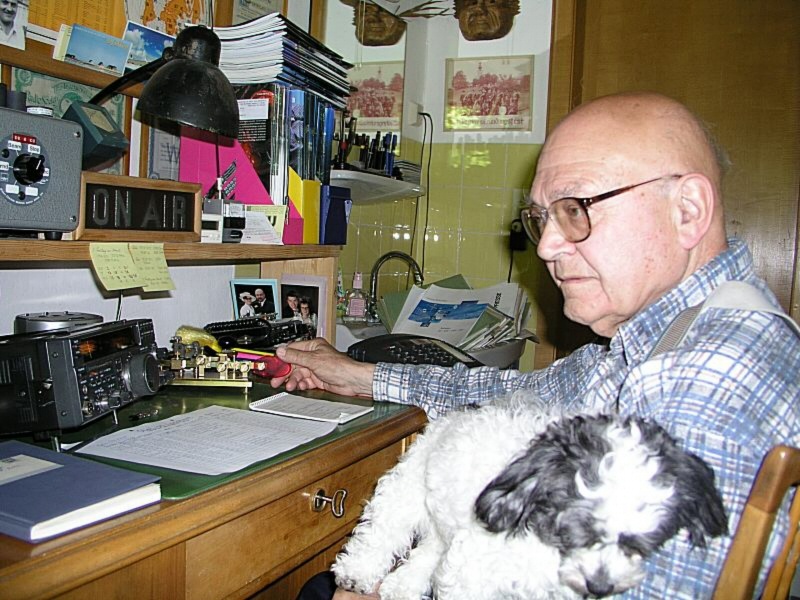 The DARC District of Southern Bavaria dedicates this tent to the memory of Karl Heinz Hille, DL1VU. Undoubtedly Karl is one of the best known and most successful German DXpeditioners of all times.

It was the South Pacific which attracted him. He travelled 7 times to the South Pacific spending altogether more than 2.5 years in the area in the 80s and 90s of the last century. In those days one could not just book a trip to remote places like P29, T31, T33, FK8, ZK1 or FO0 to name just a few. One needed to be patient, creative, dedicated, focused and experienced. And one needed to be tough and to be able to cope with hardship.

Karl did it all by himself on a ridiculously low budget. He financed his trips by the proceeds of various publications, among them a series of articles and a book entitled "From Electron to Resonant Circuits" which is considered to be one of the backbones of preparing "want to be ham radio operators" for the license test.

Karl just loved the challenge. No beams, no high power amplifiers, no containers. He just hand carried what was needed; and he achieved: More than 100 k QSOs out of the South Pacific area. Numerous hams from all over the world increased their DXCC-rating due to Karl's activities in the South Pacific.

By profession Karl was a teacher in a Bavarian Grammar School to the South of Munich. However, by obsession he was a high caliber antenna engineer. He filed two patents on wire antennas and he published many scientific articles on the subject. His "Stromsummenantenne" became famous because of the outstanding signals Karl was able to produce over very long distances.

After WW II, Karl engaged himself to a great extent in establishing a ham radio infrastructure in Germany. He was a co-founder of the Bavarian Amateur Radio Club, which was the predecessor of today's DARC. In recognition of his contributions to the development of amateur radio in Germany Karl was awarded with the "Golden Needle" of DARC, the highest honor DARC can grant for exceptional contributions.

Irrespective of his outstanding achievements and contributions Karl pleased his many friends from all over the world with his very modest personality. He never showed off. Karl passed away on September 12th, 2016 at the age of 94.

He will not be forgotten!